Krzysztof Warlikowski is one of the most prominent European directors of his generation, born in Poland in 1962. In collaboration with scenic designer Małgorzata Szczęśniak, Warlikowski creates outstanding theatrical images. Through his work process, he leads his actors to reach the deepest layers of their creativity. He has created a new way of staging Shakespeare, his body of work contains also subversive interpretation of Greek tragedies, but he is also well known for his staging of modern authors. His 2002 production of Sarah Kane’s Cleansed at the Festival d’Avignon and the Festival de Théâtre des Amériques in Montreal received wide acclaim. It was a turning point for Warlikowski’s international presence.

Since 2008 he has been the Artistic Director of Nowy Teatr (New Theater) in Warsaw, where he has so far directed four shows based on multilayers text adaptation: (A)pollonia (2009), The End (2010), African Tales by Shakespeare (2011) and Kabaret warszawski (2013). Now he is working on stage adaptation of In Search of Lost Time by Marcel Proust. In Nowy Warlikowski created a very own thinking about the role and place of theatre in the society keeping on involving spectators into the debate. His headline for the theatre became: “Escape the theatre”. Warlikowski’s theatre productions were presented at the most important festivals: Festival d’Avignon, Festival Prensa de Otoño in Madrid , Edinburgh International Festival, Wiener Festwochen, Next Wave Festival BAM in New York, Athens Festival, International Theatre Festival Santiago a Mil In Chile, International Theate Festival PoNTI in Porto, XXI Seoul Performing Arts Festival in South Korea, Festival BITEF in Belgrad.

A separate field of Krzysztof Warlikowski’s work involves opera. Warlikowski is directing in the greatest european opera houses including La Monnaie in Brussels, the Paris National Opera and Bayerische Staatsoper in Munich. In his attempt to “retheatralisation” of the opera he is perceived as one of the revolutionary opera director. He staged between others: Iphigenia in Tauris, The Makropulos Affair, Parsifal, The Woman without the Shadow, Medea, Lulu and recently Don Giovanni.

Krzysztof Warlikowski is a winner of numerous awards, including the Award of the French Theatre Critics' Union, both in 2003 for production of Sarah Kane's Cleansed, judged to be the best foreign language production to be presented in France during the 2002/03 season. In 2008 French critics awarded also Angels in America. He was honored by the Theatre Critics' Section of the Polish branch of the International Theatre Institute for popularizing Polish theatrical culture abroad. In 2006 he received the prestigious Meyerhold Award in Moscow, and in April 2008, the X Europe Prize “New Theatrical Realities” in Thessaloniki, Greece. In May 2008 New York’s Village Voice gave Krzysztof Warlikowski its Obie Award for the direction of Krum by Hanoch Levin, presented at BAM’s 25th Next Wave Festival. He was awarded a prize “Golden Mask” for the best foreign performance shown in Russia in 2011 for Nowy Teatr production (A)pollonia. In May 2012 Nowy Teatr was honored by the international jury chaired by Gerard Mortier of The Diagilev Award in Perm for the performance African Tales by Shakespeare. In 2013 he received a high French distinction of Commandeur des Arts et Lettres. 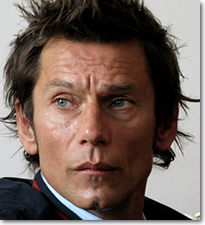