Helene Weigel (1900 - 1971) was one of the outstanding German actors of her generation.
The actress Helene Weigel was a respected theater actress who established herself in the lead role in the play Mutter Courage und ihre Kinder (Mother Courage).
Helene Weigel had artistic training from 1915 to 1918 and was given her first theater engagements in 1918, such as at the Neues Theater Frankfurt, the Staatliches Schauspielhaus Berlin and the Deutsches Theater Berlin.
She met the writer Bertolt Brecht at the beginning of the 20s, and their first child was born in 1924. They were married in 1929. Helene Weigel was the inspiration for many of Bertold Brecht's literary women and she portrayed them impressively on stage.
Helene Weigel appeared in Fritz Lang's legendary silent movie Metropolis in 1927, in which she portrayed a female worker in. However, the theater was still hub of her life. One of her greatest successes was Brecht's Die Mutter in 1932.
She worked as director of the Berliner Ensemble which she founded with Bertolt Brecht and dedicated to the challenging mission of publishing Brecht’s complete works and setting up his archives after his death in 1956. 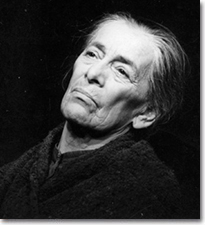