Girish Karnad was born in 1938 in Matheran, India and educated in Karnatak University, Dharwad and at Oxford where he was a Rhodes Scholar. After serving for seven years with the Oxford University Press in India, he resigned to devote himself to writing and film-making. He served as the Director of the Film and Television Institute at Pune in 1974, 1975 and is at present the Director of the Nehru Centre, the cultural wing of the High Commission of India in London.

He writes his plays in Kannada, the language of the state of Karnataka where he lives, and has translated them into English. His second play, Tughlaq (1966), established him as a playwright of all-India stature. The Guthrie Theatre of Minneapolis presented his play, Nagamandala, for its 30th Anniversary Celebrations in 1993 and went on to commission his next play, The Fire and the Rain. The Leicester Haymarket Theatre commissioned Bali The Sacrifice which is scheduled to open in June 2002.

He was a Fulbright Playwright-in Residence and Visiting Professor at the University of Chicago in 1987-88. He has been decorated with a Padma Bhushan by the President of India and was the Chairman of the Sangeet Natak Akademi, the National Academy of the Performing Arts during 1988-93. He was awarded the Bharatiya Jnanpith, India’s highest literary prize, in 1999.

He has also directed films which have won national and international awards and has acted for renowned film-makers such as Satyajit Ray, Mrinal Sen and Shyam Benegal. 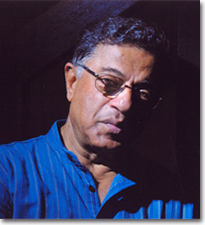