Ellen Stewart (born November 7, 1918 Alexandria, Louisiana), is an American theatre director and producer and the founder of La MaMa, E.T.C. (Experimental Theatre Club) in 1961.
She has staged composed, directed and written librettos for original folk-opera/spectacles, presented in many countries such as America, Uruguay, Argentina, Austria, Italy, Turkey, the Philippines, the Cameroon, Zaire, Senegal, Morocco, Israel, Bulgaria, and Yugoslavia. New Eastern European Theatre was introduced in America in 1967 when Ellen Stewart brought Jerzy Grotowski, Ryszard Cieslak, and Ludwig Flaszen to America. In this endeavor she was aided by Ted Hoffman of New York University. Ms. Stewart was instrumental in introducing to America some of the world's most influential artists including Andrei Serban and Tom O'Horgan.
Ellen Stewart is the recipient of many Honorary Doctorates and awards, among which are the prestigious MacArthur "Genius" Award and the National Endowment for Arts and Culture. She was appointed an "Officer" in the "Ordre Des Arts Et des Lettres" of the Republic of France and received the Les Kurbas Award for "Distinguished Services to Art and Culture" from Ukraine.
In January 1993 Ellen Stewart was inducted into the "Broadway Theatre Hall of Fame," becoming the first Off-Off-Broadway Producer to ever receive this honor.
In 2005 Tom O'Horgan presented Stewart with the Stewardship Award from the New York Innovative Theatre Awards. This honor was bestowed to Stewart on behalf of her peers and fellow artists of the Off-Off-Broadway community "in recognition of her significant contributions to the Off-Off-Broadway community through service, support and leadership." 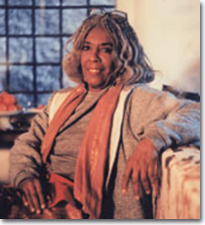