Federico Mayor Zaragoza was born in Barcelona in 1934. He holds a Ph.D. in Pharmacy from the Universidad Complutense de Madrid (1958). In 1963, he became a Professor of Biochemistry at the Facultad de Farmacia of the Universidad de Granada. In 1968, he became Rector of that institution, a job he held until 1972. The following year, he was named Professor in his specialty at the Universidad Autónoma de Madrid. Among his political responsibilities, Professor Mayor has been Undersecretary of Education and Science for the Spanish Government (1974-75), Member of the Spanish Parliament (1977-78), Adviser to the Prime Minister (1977-78), Minister of Education and Science (1981-82) and Member of the European Parliament (1987). In 1978, he became Assistant Director-General of the UNESCO. In 1987, he was elected Director-General of that Organization, and was reelected for a second term in 1993. In 1999, he decided not to run for a third term and, upon returning to Spain, created the Fundación Cultura de Paz, of which he is Chairman.
During the twelve years he spent as head of UNESCO (1987-1999), Professor Mayor Zaragoza gave new momentum to the Organization's mission, "to build the bastions of peace in the minds of men". It became an institution at the service of peace, tolerance, human rights and peaceful coexistence, by working within its areas of authority and remaining faithful to its original mission. Following Professor Mayor's guidelines, UNESCO created the Culture of Peace Program, whose work falls into four main categories: education for peace, human rights and democracy, the fight against exclusion and poverty, the defense of cultural pluralism and cross-cultural dialogue, and conflict prevention and the consolidation of peace.
On September 13, 1999, the United Nations General Assembly approved the Declaration and Programme of Action on a Culture of Peace, which constitutes, from a conceptual and practical standpoint, the greatest aspirations of Professor Mayor Zaragoza.
With the Fundación Cultura de Paz, founded in Madrid in March, 2000, Professor Mayor continues with the work he started as Director-General of UNESCO: to promote, in every area of human life, the transition from a culture of violence and imposition to one of peace and tolerance. In October 2005 he was appointed by the UN Secretary General Kofi Annan co-chair of the High-Level Group for the "Alliance of Civilizations". In June of 2008, Federico Mayor has been named Chairman of the Agency of News ”Inter Press Service (IPS)".
In addition to his numerous scientific publications, Professor Federico Mayor has published four books of poetry, including A contraviento (1985), El fuego y la esperanza (1996) and Voz de vida, voz debida (2007), En pie de paz (2008) and several books of essays including Un mundo nuevo (1999), Memoria del futuro (1994), La paix demain? (1995), UNESCO : un idéal en action (1996), and "Diálogo ibérico en el marco europeo y mundial" with the former President of Portugal Mr. Mario Soares (2006). 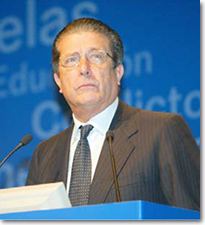