Dario Fo, born 24 March 1926, is an Italian satirist, playwright, theatre director, actor, composer and recipient of the 1997 Nobel Prize in Literature. His dramatic work employs comedic methods of the ancient Italian commedia dell'arte, a theatrical style popular with the working classes. Fo's work is characterized by criticism of organized crime, political corruption, political assassination, the doctrine of the Catholic Church and the conflict in the Middle East.

Fo’s first theatrical experience was collaborating on satirical revues for small cabarets and theatres. He and his wife, the actress Franca Rame, founded the Campagnia Dario Fo–Franca Rame in 1959, and their humorous sketches on the television show Canzonissima soon made them popular public personalities. They gradually developed an agitprop theatre of politics, often blasphemous and scatological, but rooted in the tradition of commedia dell’arte and blended with what Fo called “unofficial leftism.” In 1968 Fo and Rame founded another acting group, Nuova Scena, with ties to the Italian Communist Party, and in 1970 they started the Collettivo Teatrale La Comune and began to tour factories, parks, and gymnasiums.

Fo wrote about 70 plays, coauthoring some of them with Rame. Among his most popular plays are Morte accidentale di un anarchico (1974; Accidental Death of an Anarchist) and Non si paga, non si paga! (1974; We Can’t Pay? We Won’t Pay!). As a performer, Fo is best known for his solo tour de force Mistero Buffo (1973; Comic Mystery), based on medieval mystery plays but so topical that the shows changed with each audience. His later works, some of which were written with Rame, include Tutta casa, letto e chiesa (1978; All House, Bed, and Church; Eng. trans. Adult Orgasm Escapes from the Zoo), Clacson, trombette, e pernacchi (1981; Trumpets and Raspberries), Female Parts (1981), Coppia aperta (1983; The Open Couple—Wide Open Even), L’uomo nudo e l’uomo in frak (1985; One Was Nude and One Wore Tails), and Il papa e la strega (1989; The Pope and the Witch).

His plays, especially Mistero Buffo, have been translated into 30 languages and, when performed outside Italy, they are often modified to reflect local political and other issues. Fo encourages directors and translators to modify his plays as they see fit, as he finds this in accordance with the commedia dell'arte tradition of on-stage improvisation.

Upon awarding him the 1997 Nobel Prize in Literature, the committee highlighted Fo as a writer "who emulates the jesters of the Middle Ages in scourging authority and upholding the dignity of the downtrodden." 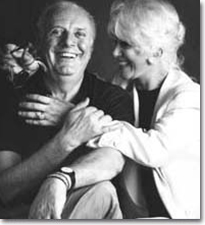 English
French
Original version of the message in Italian