Iakovos Kampanellis was born on the island of Naxos in 1922. In 1935 his family moved to Athens which has been his home ever since.

As a boy he worked during the day and went to school in the evening.

In 1940, during World War II, he took part in the anti Nazi Resistance and tried unsuccessfully to escape, first to the Middle East and then to Switzerland through Austria, where he was arrested and deported to the concentration camp of Mauthausen. He remained in Mauthausen until May 5th 1945 when the camp was liberated by the Allied Forces.

When he returned to Athens, at a time when Greek theatre was flourishing, especially with the performances of Karolos Koun, Iakovos Kampanellis was shocked by the realisation that a theatre performance had the power to move a man who for years had seen women and children dying in a concentration camp. He decided to become involved in the theatrical process. He tried to be an actor but as he said " I didn't graduate from high school and I couldn't attend a drama school so ... I decided to write ! "

The wisdom of this choice soon became obvious as, right from the start, his plays were acknowledged and performed. Up until now he has written over fifty plays for theatre and cinema and has influenced the Greek theatre to such an extent that we are now referring to the post World War II writers as the "Kampanellis generation ".

His plays are performed both in Greece and abroad, and his work has been translated into many languages.

Iakovos Kampanellis is a distinguished member of the Hellenic Centre of the International Theatre Institute and its Board. He is a member of the Greek Academy of Arts and Sciences. 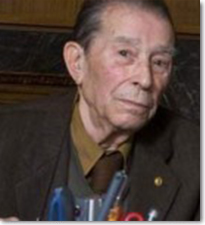