Man of the theater, Robert Lepage is equally talented as a theatre director, set designer, playwright, actor and film director. Recognized by international critics, he creates and brings to the stage original works that disrupt the scenic realization of classical codes, including the use of new technologies. He draws his inspiration from contemporary history and his modern and unusual work transcends all boundaries.

From 1989 to 1993 he served as Artistic Director of French Theatre at the National Arts Centre in Ottawa. Along with this new function, he continued his artistic work with Les Aiguilles et l’opium (1991-1993/1994-1996), Coriolanus, Macbeth, The Tempest (1992-1994) and A Midsummer Night's Dream (1992),that allowed him to become the first North American to direct a Shakespeare play at the "National Theatre" in London. The year 1994 marks a milestone in his career as he founds a multidisciplinary company, Ex Machina.

Subsequently, he directed the movies The Polygraph (1996), Noh (1997), Possible Worlds (2000), a first feature written in English, and finally, in 2003 he directed the adaptation of his play The Far Side of the Moon. 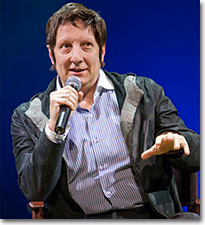