Víctor Hugo Rascón Banda was born in 1948 in Uruáchic.

In 1979 he wrote his first play Voces en el umbral (Voices on the Threshold), an innovative text that recreates the life of two women, one of them a German and the other a Tarahumara. Los ilegales (The Illegal), the first of his plays on stage, was the beginning of a career marked by popular acclaim, as well as recognition from critics and the academic world. For his plays, Víctor Hugo has been awarded several national and international prizes: Ramón López Velarde (1979), Teatro Nuestra América (1981), Juan Ruiz de Alarcón (1993) y Rodolfo Usigli (1993). Recently, he received the “Xavier Villaurrutia” medal, an award given by the artistic community of his country, through the National Institute of Fine Arts and the National Council for Culture and Arts, as recognition for his life’s work.

Plays such as Contrabando (Contraband) (1991), La mujer que cayó del cielo (The Woman who Fell from the Sky) (1999), Sazón de mujer (Woman Seasoning) (2001) or Apaches (Apaches) (2003) access subterranean worlds, both tragic and passionate, inhabited by beings who stare us down and denounce injustice, pain, desire and social marginality.

His dramatic work is one of the most produced and published in Mexico. Some of the national theater prizes bear his name: Monologue Dramatic Composition in Quintana Roo; One Person Theater Contest in Quintana Roo, and Playwrighting Prize in Nuevo León. 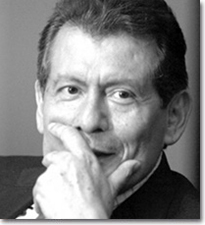