Celebrated French stage actor/director/producer Jean-Louis Barrault was born on September 8, 1910. A superlative tragedian and mime, his dedication to both avant-garde and classical plays helped revive the French theatre after World War II, while presenting world premières of works by such playwrights as Samuel Beckett, Eugène Ionesco and Jean Genet.

Barrault initially was a teacher and studied art before turning to the theatre. A gifted student of both Charles Dullin of drama and Etienne Decroux of pantomime, he made his official film bow in Vagabonds imaginaires (1930) (billed as J.L. Barrault), and took his first curtain call a year later playing a servant in "Volpone" at the Theatre de l'Atelier. While he made quite an impact in numerous classic, romantic films, including Drôle de drame ou L'étrange aventure du Docteur Molyneux (1937), Mirages (1937) and Les enfants du paradis (1945) (the last two opposite the exquisite Arletty), the theatre would remain Barrault's greatest passion, marking his directorial debut with "Les beaux jours" in 1935. Five years later he would join the Comedie Francaise as both actor/director. 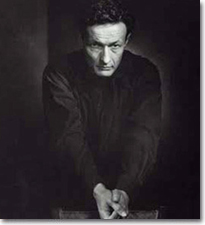