Trained at the Central School of Speech and Drama, Judi Dench made her first steps on stage singing the role of Ophelia in Hamlet in Liverpool in 1957. Internationally renowned actress, Judi Dench played many times for the Royal Shakespeare Company, National Theatre, and the Old Vic. During her career she won numerous awards including the BAFTA, Golden Globe. In 1999 she received an Oscar for best supporting role in Shakespeare in Love.

Since 1988, she was appointed Dame Commander of the Order of the British Empire. 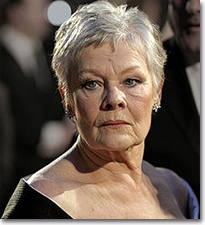